Evening All,
Ran into a situation this evening while buying some items. The Vet had 2 pristine woodland and 6 DCU tops 173d double patched with combat jump wings, pathfinder, etc., etc. Only thing not awarded was the CIB. The catch was he'd only sell them to me if he removed his name tapes. Had an honest discussion with him regarding the collector value of leaving all the patches/tapes on vice removing his name tape vice removing it all and selling as regular tops. To me the collectibility and value would have been greatly impacted. I completely understood and respected his reasoning for wanting to remove the tapes. I told him I'd rather not buy them vice buying them with the tapes removed. Once he retires he said he'd have no problem selling them complete. I convinced him to put them back up and keep them. Left him my contact info so hopefully it will work out.

I'd be curious as to other's opinions but am hoping this doesn't turn into a fur ball. All opinions are respected and welcomed. Did it all really matter? Was I being too much of a stickler?
_________________
Semper Fi
Jeff
Nkomo

The only work around to that is if he would be willing to give you a provenance statement etc. Its really tough to get guys to realize their names on uniforms doesn't matter. I have a SGM's uniform that he listed on ebay with name tapes on it, but stated they'd be removed. Luckily He mailed it with his full name so I simply cut that off the package and kept our e-bay correspondences.
Bagman6

I would have done the same, hopefully it works out for you. Anyway, why do vets not like to sell named pieces? I never heard of that before.
Bagman6

In this case he's still on active duty and assigned to USASOC. I understand his position. It's a mind set of not drawing attention to yourself. I was the same way. You're gone a lot and you just want to be sure you've done all you can to protect yourself and family.
_________________
Semper Fi
Jeff
Mercenary25

Been there. I covinced the vet that I will NOT show his jacket, if I do, I will cover the name.

Or... Try to offer him slight more money than the original agreement. Explain to him that named uniform is worth more than unnamed uniform. And you are willing to pay for it.
Static line

Automatic wrote:Anyway, why do vets not like to sell named pieces? I never heard of that before.

Automatic wrote: Anyway, why do vets not like to sell named pieces?

Worried that it will somehow come back on them. Its rather silly but it happens all the time. I've sold my stuff with nametapes before and have no issue doing such. It's really personal choice.
Longbranch

I personally pass on anything with a name tape removed. Even with uniforms that have a name written inside, and even from a desirable unit, I just can't ever get over the idea that the uniform isn't quite 100% original and eventually pass them on to other collectors. I know I'm too picky, and I've passed over some cool stuff. I also don't buy very many DCUs these days. Just a few weeks ago I left a 100% legit modified 75th Ranger DCU at a flea market because the name/branch tapes had been removed. It was a cool jacket though. I'm sure in 30-40 years I'll say to myself "self... these things have gotten REALLY expensive", but what the heck, we should all collect what we like.

Having said that, I have paid a pretty hefty premium to a vet in the past if they left the name tape in place. I'm generally up front and explain I'm a collector of field-used uniforms in original, as-used condition, and that the uniform isn't worth anything to me with a removed name tape. I figure it's a win-win... the vet gets more money for his/her stuff, and the collector gets a nice original jacket out of the deal. If they still aren't willing to leave it in place, I politely tell them I'll pass and wish them luck with the sale. It's the vet's stuff, and they can sell it however they want.
anelles

You handled it right. I'd rather pass than have someone destroy history like that. Hopefully you get lucky and he gives you a call when he's ready.

I usually explain it as it's keeping history intact, not just keeping the value up. Sometimes they understand and agree.
BM

Back in 1974-1991 when I was in the Minnesota Army National Guard, when uniforms were turned in, all rank, nametapes,
US Army and shoulder patches were stripped off the uniforms. The supply Sgt. said it was because some of them were "recycled"
to be used again plus the army tapes and unit patches could be used at unit level is someone was missing one of the items.
We were told back then that in order to wear these uniforms as civilian clothes, all military items were to be removed.
I did some research into Army regulation 670-1, 1 Sep. 1992, Wear and Appearance of Army Uniforms and Insignia. I did manage to find a little information
and will post it here.
I started on the bottom of page13 but the interesting part is on page 14 on the top (5) b. where it says "Individuals will remove all distinctive
items before disposing of unserviceable uniform items.
Just what is "unserviceable" items? Too ragged to wear? New styles are produced and only wear current issue until the new style is received
or the old style is wore out?
Maybe this is the reason some want their name tapes removed. No name, no one to charge with anything plus some people don't like their
name floating around.
Bob 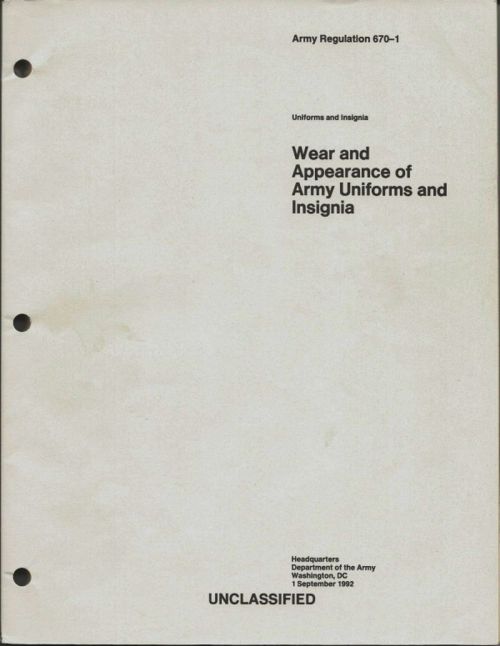 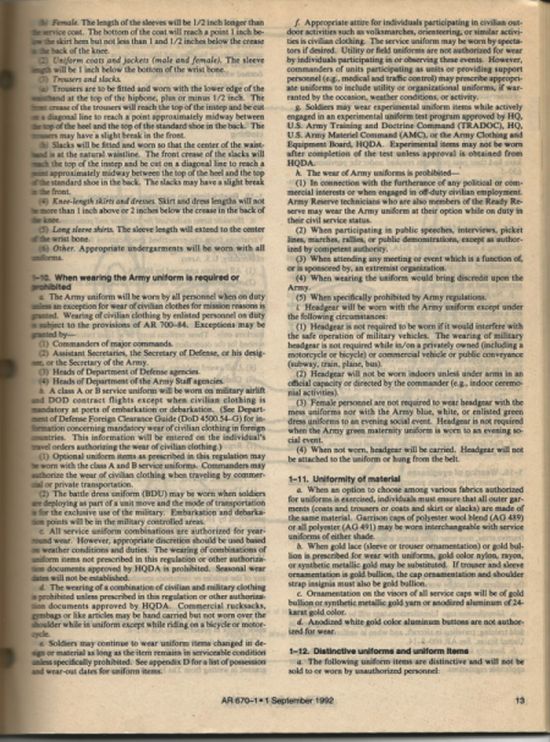 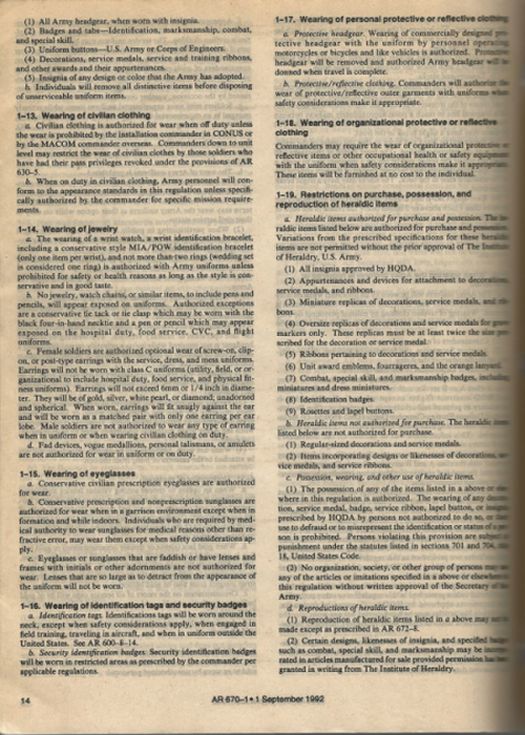 Unserviceable refers to uniforms with noticeable stains, tears, holes, excessive fading, non working zippers/buttons/velcro, or too tattered to wear by a service member.

This isn't affected by a new camouflage pattern, until the mandatory wear out date arrives.

The name on a set of 173rd DCUs is key regardless of the LOP.  I had several shirts, missing the name tape, and even though the other shirts had the name tapes those without them had little to no value on this forum or epay. For this reason, I also pass on nameless shirts these days. Personally, I don't get the "I must remove the name" thing and I wore a uniform for over 24 years.  Everyone here knows how hard it is to figure out who the real owner is even with a last name and a last four written inside.  Here's the catcher, if that same vet has a linked in account or posts things about their military service on Facebook then why pull off the name tapes; some of most of their service record is already out there for all to see.
RedLegGI

airborne1968 wrote:The name on a set of 173rd DCUs is key regardless of the LOP.  I had several shirts, missing the name tape, and even though the other shirts had the name tapes those without them had little to no value on this forum or epay. For this reason, I also pass on nameless shirts these days. Personally, I don't get the "I must remove the name" thing and I wore a uniform for over 24 years.  Everyone here knows how hard it is to figure out who the real owner is even with a last name and a last four written inside.  Here's the catcher, if that same vet has a linked in account or posts things about their military service on Facebook then why pull off the name tapes; some of most of their service record is already out there for all to see.

Whats funny about the linked-in thing is that a lot of press coverage tends to fall on higher ranks and sometimes NCOs etc. With those stories and linked-in its an easy connection to make with the uniforms and the patches present. Totally negates them taking the tapes off in the first place lol.
Grey Marine82

I enjoyed reading this guys! My two cents is that I still occasionally pick up the 'no name tape" BDU's/DCU's if they are SF/Ranger. I find it sad that we (active and retired military) remove the name tape therefore destroying the historical integrity of an historical item!

I grew up an Army brat (my father served 30 years), and lived all over the U.S. and Europe. I started collecting as a kid (spent my weekly allowance at the Mons (Belgium) flea market each Sunday morning.

Although I kept all of my collected stuff, I got away from collecting - high school, girl friends, then 28 years in uniform myself.

It never really occurred to me that all my old uniforms would pose any interest to a collector, until one contacted me wanting to buy a few items I had posted in a militaria collector's forum. I brought home lots of 'bring backs' from Gulf War One and a couple tours to Iraq.

Having retired my wife got onto me a couple years ago and told me I needed to take up a hobby. I've started back collecting militaria, however I'm more into vintage (20th Century) items.

I've been buying named DCUs and field gear for a friend, and he's growing a respectable collection.

However, I can relate to the issue of removing nametapes from personal uniforms. It feels awkward to hand over an item which still bears your name, also there are always concerns over misuse or potential for being "out-ed" for other military assignments (primarily in the Special Ops community ... I served the majority of my 28 years in Special Forces and Military Intelligence units). Not much of a problem, however, if your name happens to be "Smith," "Jackson," "Jones" etc ...

That being said, having gotten back into collecting I better understand the desire for named items and for provenance. These concepts were foreign to me when I started collecting in middle school. And when I can I seek information to keep with the vintage items I find.

I've been buying named DCUs for a friend who collects. I'm not really much into collecting stuff from the current wars ... and I'm quite certain that I'll regret this 20 or 30 years from now. The items I've accumulated during my deployments all have special meaning to me, and will be things I eventually hope to pass on to my grandkids.

I'm fortunate in that I live very close to an Army post. That one of the local surplus vendors is a buddy is of big help when I look for named stuff for my friend.

I've been finding ACU jackets with patches, rank, nametapes still attached - to include a couple still bearing the pin-on badges. I figure on picking these up when I see them, as they don't really cost me that much.
Sponsored content