I am going to say this again for all modern collectors, especially those of us who collect OEF/OIF militaria. You need to start building your collection NOW! These two wars have seen an influx of non-issued items used by soldiers who get deployed to either theatre of operations. It is going to be a nightmare in a bit when OEF/OIF militaria picks up in popularity. I'm not suggesting that it isn't a nightare now, but it will only get worse. I truly expect this area of collecting to eventually reach the same level of popularity as Vietnam is now. Document every item you buy now. Do the research and include it with the uniform, patch, headgear, webbing, etc. Print off pictures, articles, roster lists, etc. and make yourself a binder to store these copies.

That being said, you need to start building your reference library now as well. With almost every uniform I buy, I print off pictures or a brief synopsis of where that unit was deployed, what time period they were deployed, who they were engaged in fighting, and what type of uniform/equipment they would have used. The little bit of research you do now, will be invaluable in years to come.

As of right now, you can buy items from these wars relatively cheap in comparison to other areas like WW2 or Vietnam. You can build a decent collection on a small collecting budget. That is why modern collecting is popular with the younger generation and beginning collectors...it's cheap in comparison. Not to mention, you can buy several quality modern items for the same price as one mediocre item from another war.

This thread is not a slam on collectors of eras of militaria. This is just a thread that needs to be posted. Think of how much history has been lost over the years due to non-documentation by collectors, veterans, family members of vets, etc. We modern collectors are in a unique position to document and preserve history of these artifacts before it is lost to time.
Nkomo

I am going to show you what I do with almost all my uniforms. Whenever I buy a new uniform, I will research the name on the uniform (if the name tape hasn't been removed). I will usually type in the rank, last name, and Shoulder Sleeve Insignia. This doesn't always get a hit on the internet, but sometimes it does and you'd be suprised what information you find. I have found articles written about these individuals, articles written by these individuals, pictures of these individual in country, pictures of these guys in combat, etc. That being said, officers are usually easier to research, but that is not always the case.

After I research the name, I will research the unit or division the soldier was part of. You can do a generic Google search and usually find tons of information dealing with that specefic unit. This will usually tell you where the unit deployed, what time period it was deployed, where it was stationed in country, who it was engaged in fighting, etc. All of this information adds history (value as well) to your item in question.

As I go along and find this information, I print off select bits of information and add to my "file" for this item. When all is said and sone, I will usually have 5-10 pages of information. After all these pages are printed, I will put them in an acid free plastic sheet. Finally, the plastic sheet with the info is kept with the uniform in a dry environment. I hang my sheets on the top portion of the hanger as can be seen from my pictures.

This may seem like a lot of work for one item, but it really isn't once you get the hang of doing research. I do this research for two reaons. First, I do it so I can know the individual history of the piece. Second, I do it for my wife and children in case something would ever happen to me. With this information, they will know it is not a random piece of junk and has some historic value.

If anyone needs help doing research on a uniform, feel free to ask me. I can't guarantee I'll be able to find anything, but I'll give it a shot. I hope my little thread can help someone. It certainly isn't high tech, but it works for me. 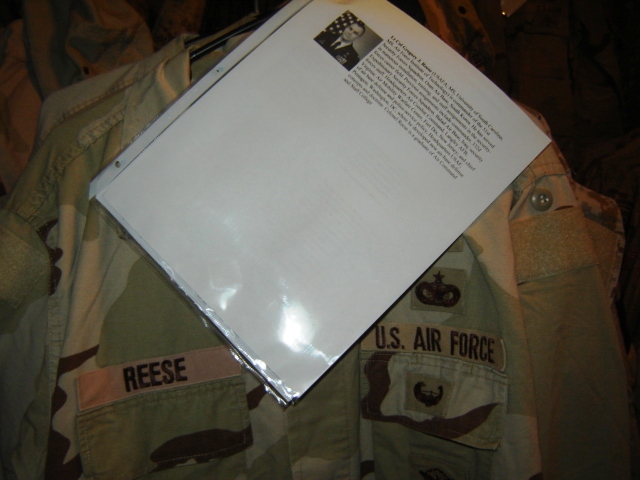 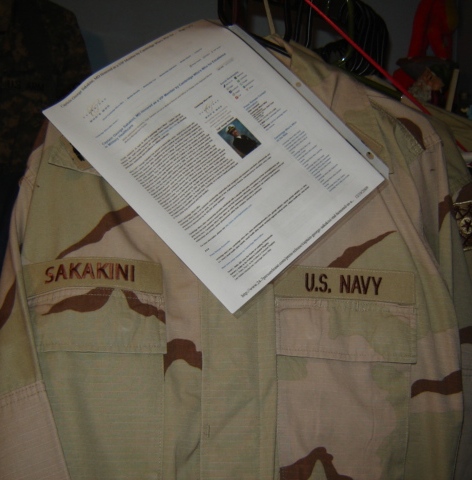 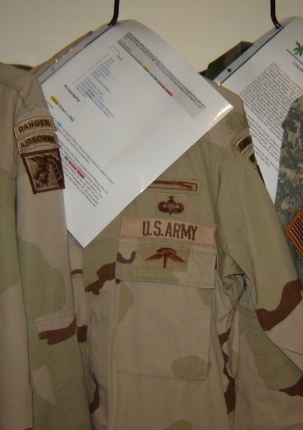 I like what your doing here. I'm starting to collect DS and OIF under 4th ID. I'll keep you in mind until I get a handle on researching myself. Do you have any favorite .com sites others can go to for research or do you just google? Do you go through as paid site or freebees?
Sponsored content