This is a huge propaganda banner that was placed/hung in certain Iraqi cities or areas that had insurgent activity.

I had the banner translated by an Iraqi gentleman and it translates to:

Top : '' This District has called for the elimination of terrorists and crime ''

Bottom : " These soldiers and national police officers responded quickly to the call of the citizens"

I like it because it shows the uniforms worn by the Iraqi Army, Iraqi SOF, and the Iraqi Police. From what I was told, these type posters were common around the 2008-2010 time period.

I think my favorite part of this is the Iraqi SOF soldiers wearing the Lithuanian produced camouflage. Looks to me to be the later 2nd generation 4 color pattern as opposed to the 1st generation 3 color pattern.

Also, one of the ISOF guys bears an uncanny resemblance to Freddie Mercury. 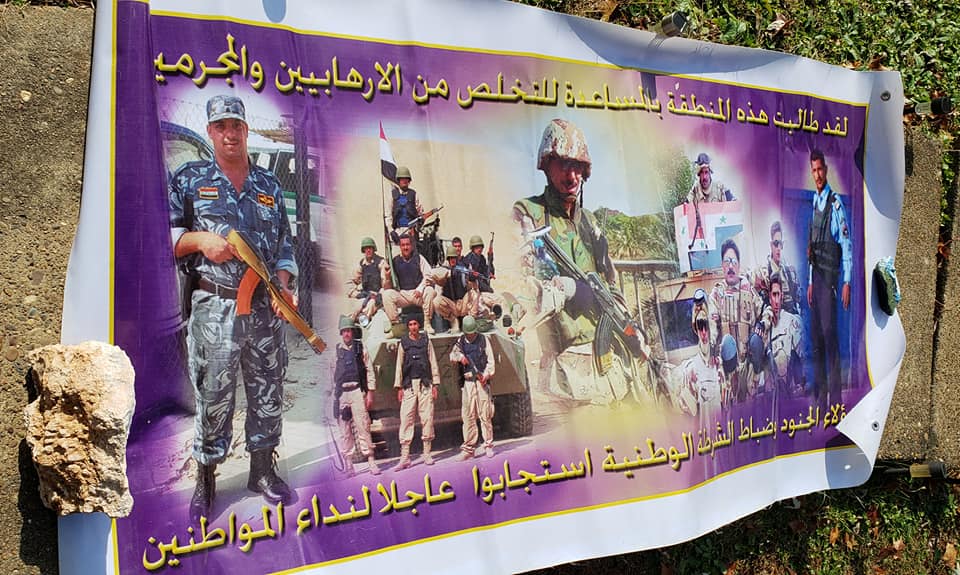 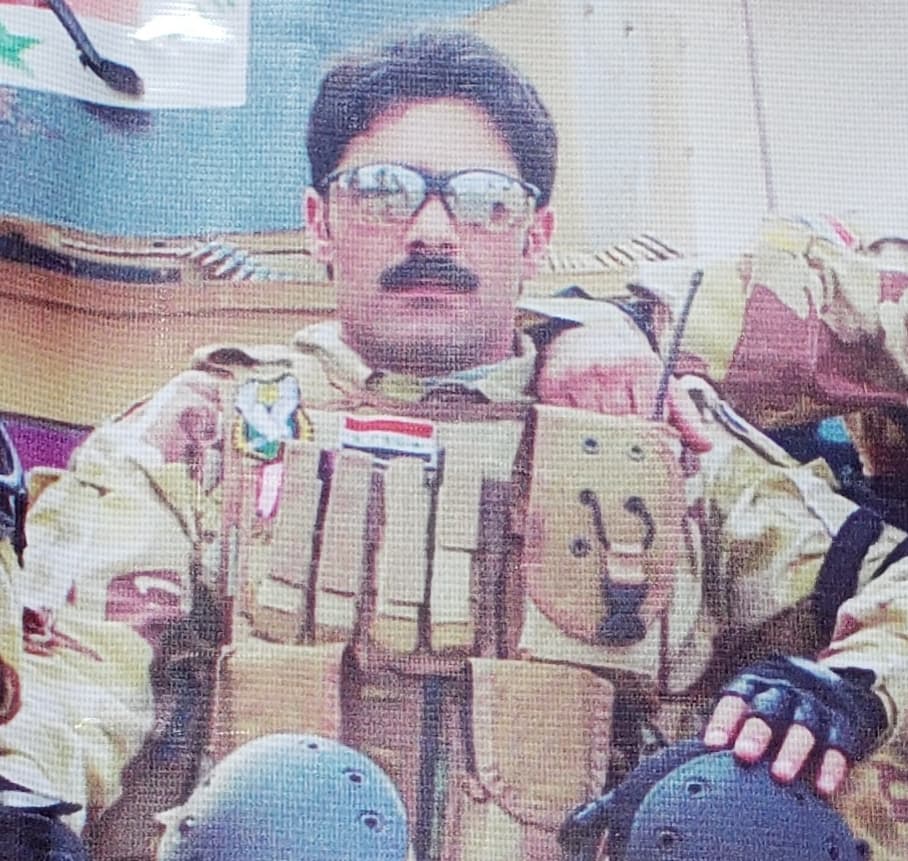 I can almost guarantee that banner was made before 2008.

If you look closely, there should be a small 10-16 digit/letter combination that would point me to the exact time period (starting with IZ and then two digits), location, and intended target audience.

if you can find that, I'd help translate some of the history.
Static line

I just skimmed through 608 pages of products, covering everything that POTF-IZ published from Oct 2008, until the end of OIF (and beginning of Operation New Dawn) and this isn't one of those products.

After the SOFA became effective in Jan 2009, POTF-IZ began supporting the Iraqi Police primacy campaign and quickly transitioned away from imagery of the Iraqi Army on products like the one you have pictured. Just as the US was pulling out of the cities and out of smaller JSS/COP bases, so was the IA. Products made during this phase of OIF focused on imagery of the National Police and Iraqi Police, as it signaled an end to the 'war' and a return to normalcy.

Nkomo, if you look at the number on the top of these pages, I'm looking for a number sequence like this: 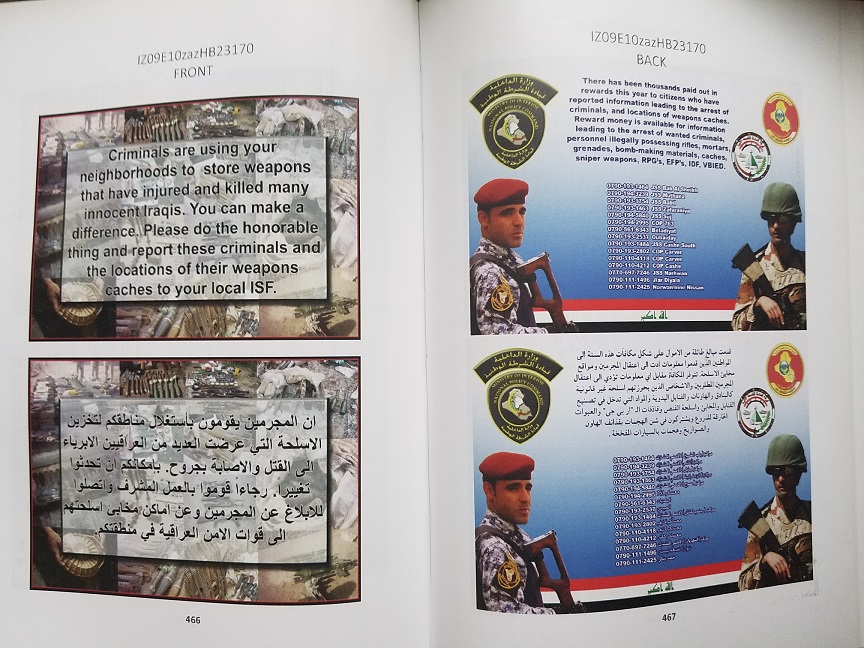 First off, THANKS for all the research and the help. I went downstairs and checked the banner and it is completely void of any number or letters.....front and back.

I think you are right about it being an earlier date because the Iraqi Policeman (not sure if National Police or not) is in the blue DPM. By 2008-2010, this uniform should have been replaced by the pixelated Iraqi National Police uniform. The dates I mentioned in the original post were dates the Iraqi gentleman said these banners were common.

If this helps narrow down a time frame, I have another huge banner like the one above, BUT it shows HESCO barriers and has Arabic writing on it as well. No numbers or letters on that one either.

Again, thank you for all the research!
Static line

That lack of numbers indicates it was probably made by POTF-IZ during Task Force 10's 2007-2008 deployment. If you can share the picture of your other billboard/poster, I'd be curious to see what it is, as it might help narrow things down a bit. For now, here is how I'm dating your product without it having a sequence number:

Sometime during the surge, things got pretty busy, and a lot of PSYOP products were being reformatted into other mediums. If you look at that sequence number I posted above you see "HB" (Handbill). The same exact product might also be found in other formats (with "BB" for billboard, LF "leaflet", etc). [The other numbers reflect the country, year, target audience, and desired objectives]. Sometimes when dimensions change from one medium to another, an illustrator has to alter the product to make it fit the new format. When they have to also edit numbers that are embedded on a product it adds another step to the process. Product numbers fell off during the surge, around the time of TF10 running the POTF, and this trend continued until the end of OIF. Since I have a copy of virtually every single product made after TF10 left, I can reasonably determine it was made during their time or before.

Although not doctrinally correct, it was easier to simply skip publishing numbers on a product and instead have a database at a headquarters that listed all historical products. Great idea, in theory. These images were usually saved on an external hard drive. While this worked pretty well initially, hard drives eventually failed and some units took them home after a deployment. Almost all of those extensive databases are lost to history, save for a couple of units that printed bound books for their own historical documentation purposes (or to sell to help with fundraising for a dining out, NCO fund, etc)..

Sadly, the same is true with a lot of databases from OIF/OEF - countless SIGACTS, SITREPS, Operations Orders, and service records are already gone forever. For those ones that did get saved, that content is still susceptible to bit rot.

I didn't know there were different patterns of the 36th Commando Brigade Camo.

It's sad how much digital media just disappears forever, but I guess the same goes for physical documents, like the 1973 personnel records fire.

Great post and thread. Arch great addition to your collection and as Bagman said what a great lesson in Iraqi banners - learned more on this thread then I ever knew before. Thanks to all for sharing knowledge.
MyZone