BAGRAM AIR FIELD, Afghanistan, (Sept. 27, 2010) - William Pegler is on his second deployment. He is spending seven months in the dry, dusty climate of Bagram, Afghanistan, a mission tens of thousands of enlisted soldiers have completed.

What sets Pegler apart from those deployed with him? His first deployment was 38 years ago and was spent in the jungles of Vietnam.

“This deployment’s a lot easier than the first one,” said the sergeant first class with a laugh.

The Gainesville, Fla., native enlisted in the U.S. Army in January 1969 at the age of 17, knowing he was headed to Southeast Asia.

“Everyone in my neighborhood was getting drafted, so I joined.”

But, at 17, the Army wouldn’t send him into a combat zone. He spent the next two years in Korea and Germany, working as a radio and telephone operator before his name came up. He then spent the next six months in Chu Lai, Vietnam, supporting the 23rd Infantry Division, better known as the Americal Division.

Currently, he works as the battalion fuel handler, but he still wears his Americal combat patch on his right sleeve.

He gets stopped on the street sometimes, he said. Mostly by sergeants major or field-grade officers, or someone who grew up with their father wearing the patch. It’s a source of great pride for him, and he said he doesn’t mind talking to people about it.

Pegler’s own father was a Spitfire airplane mechanic in the Royal Air Force during World War II, but said he didn’t encourage or discourage him from joining the military.

Now with two grown children of his own and a second grandchild on the way, Pegler thought one more deployment was in order.

“You have a guy that’s almost 60,” said 1st Sgt. Warren Treadwell. “He works circles around these kids and asked to go.”

“I want to do my part before I retire; one more time,” said Pegler.

When the battalion was preparing to deploy, even though he didn’t have to go, he knew he was needed.

“He has a skill set that’s hard for us to get,” Treadwell added.

“The battalion thought I could help them out. I’ve been handing fuel for 20 years; I’m good enough that I don’t spill any,” said Pegler.

Pegler will turn 59 years old during this deployment. He wears the look of someone with life experience, a thick grey mustache and a permanent cigar in his mouth.

He feels the young Soldiers coming into the Army are smarter than he was at that age, but he tries not to treat them like kids.

“I don’t tell them what to do, I just say that I would do it this way.”

He acknowledges that the Soldiers aren’t the only thing that’s changed between the two wars.

At Bagram, he tailors his week around Friday’s surf and turf night, where he can enjoy a steak and lobster tail while watching the news or a game.

When he isn’t activated, he works as a troop housing noncommissioned officer at Camp Blanding, a civil service job he’s had for three years.

“I managed the fuel points at Camp Blanding for 18 years. But, now that I’m older, this job is more laid back. I’m taking care of the troops in different ways.”

After 32 years in service (there were two breaks in service, first after he returned from Vietnam and for 10 years between active duty and the National Guard), he now looks forward to retiring once he turns 60.

“I’m going to jump on my Harley Davidson and go wherever I want to. When I feel like stopping, I’ll stop for a day or two, and then I’ll go somewhere else.”

I wonder how many OEF/OIF soldiers already served in Vietnam War? Must be a rare breed!
Darktrooper

Great story, being his age and still wants to serve. Just cool.


But one thing I did take away from this article is that Fridays you get lobster in Afghanistan. Lobster; who would have thunk that!!!!
Darktrooper

Zeked wrote:Great story, being his age and still wants to serve. Just cool.


But one thing I did take away from this article is that Fridays you get lobster in Afghanistan. Lobster; who would have thunk that!!!!

It's a nice change of pace from having chicken with every darn meal.
_________________
Honorably Discharged US Army Veteran
SGT, Military Police
OEF VI-VII
Jim McCauley

Louis Swift picture is wrong it's another soldier in the unit.

Steve Derry was a Vietnam Americal and 1st Cav vet.

In the 04 deployment the 42nd CAB had a all Vietnam Vet aircrew flight. I can't find a link to that story.
MyZone

I met CWO5 Royal before he retired. He had to have been one of the most positive and optimistic gentleman that I have ever met....I had the pleasure of conversing with him about some of his military experiences -  (maybe 0.00001% of his 41+ year career).
Link to story about CWO5 Royal 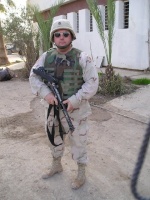 My First Sergeant was a Marine in Vietnam, was 58 when we deployed in 03. Scott
MyZone