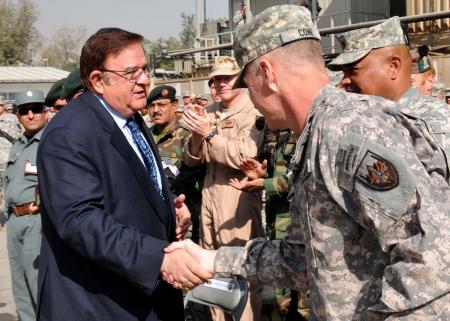 In attendance at the ceremony were CSTC-A key leaders and their Afghan counterparts, who replaced the previously worn Central Command patch with the new CSTC-A patch.

The original patch design was submitted by U.S. Army Staff Sgt. Brian Posey, a former CSTC-A servicemember, during a contest that invited all CSTC-A personnel to submit ideas for the future CSTC-A SSI.

The new patch is a shield-shaped insignia with shafts of wheat extending up from the base and both sides. A Roman gladius short-sword is shown in the center of snow-capped mountains of the Hindu Kush, the foothills of the Himalayas.

The golden stalk of wheat on the patch denote prosperity for the government of the Islamic Republic of Afghanistan, and the gladius short-sword and infantry crossed rifles show the support for security from the Afghan national security forces, the United States and coalition authorities as they bring peace and stability to the region.

Over the past year, while the patch was being designed and created, CSTC-A has made significant growth and progress in developing a more stable security force, said Cone.

Additional symbolic representation on the patch includes a set of silver wings behind the short-sword, which denotes the technological and logistical advances of the new Afghan national army air corps.

Throughout the year, the Afghan national air corps has increased its capability and now flies 90 percent of all missions required for its Army, showing growth as a self-sustaining force.

The guest speaker of the ceremony, Gen. Abdul Rahim Wardak, Afghan minister of defense, expressed his thoughts about the new patch.

"I would like to express our profound gratitude, deepest appreciation and heart-filled thanks to every member of the Combined Security Transition Command - Afghanistan for what they have done, what they are doing and what they will continue to do for my beloved ANA," said Wardak.

"I hope and pray that the new Afghanized insignia will bring luck, successes, glories and more victories to every present and future member of CSTC-A," he said.

A unique addition to the new SSI is the sky background, which is composed of the tricolors of the Afghanistan national flag, black, red and green, and is symbolic of a new democracy spreading throughout Afghanistan.

"Presenting the colors of our flag deeply touched and enormously impressed not only me but a very gracious Afghan nation," said Gen. Wardak.

"This is one step forward in the right direction of building unity and being a part of something great," said Coleman.

"With a strong conviction, I can say that no command in the U.S. Army and the U.S. Armed Forces or the international forces has so lasting, so far-reaching and so enduring effects and impacts on the peace, security, stability and future prosperity of this county as the CSTC-A," said Wardak.