Good day all!! Hope everyone has been staying on Santa's nice list.  If not you got about 8 days my friend.

Have been through many, many piles of multicam.  Have never seen labeling like this.  Is it anything?  If so any value or collectibility? Thanks. 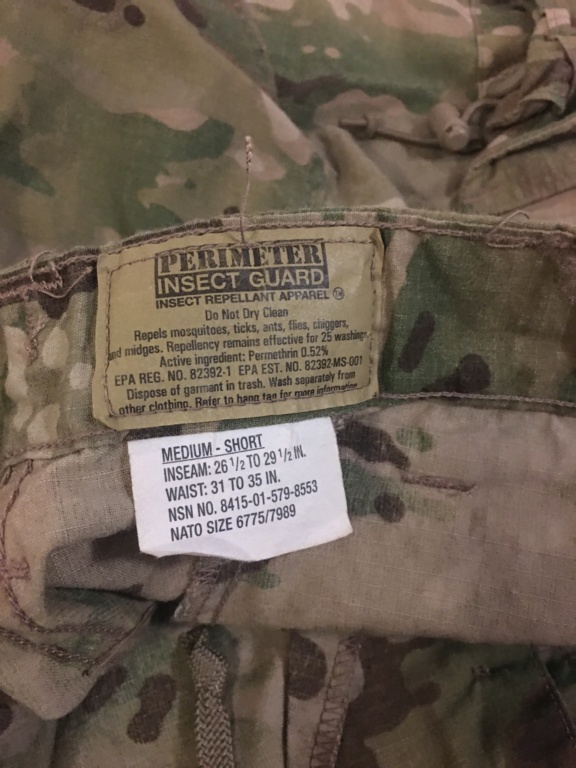 The Perimeter Insect Guard? It's a pretty common thing, I believe it has been standard for several years, all OEF-CPs and OCPs in my collection have it, I also have a few later UCPs with it. My OEF-CP pants don't have it on the waist like that, it is inside on the back left pocket, the uniforms all have it behind the left breast pocket. I haven't seen one on a uniform with a contract before 2010, and one of my OEF-CPs with it I bought in early 2014 so its adoption likely falls into that range.
Zeked

Seen the tag lots of times but not in this location. I am guessing it does not increase the value though Jeff. I could be wrong but
I have not seen anything posted on it before. I do not see a lot of multicam uniforms and when I do see them I just look at the
contract date and nothing else. Thanks Clete
Bagman6

Thanks gents. Good info Cap on the dates so that gives me a time frame. I'd bet I've gone through at this point over 1k sets of multicam in my collecting career. I agree Clete, never seen a tag arrangement like these trousers.
_________________
Semper Fi
Jeff
Sponsored content