I noticed that there weren't too many 777th SMW patches on the forum, so I thought I'd add mine. 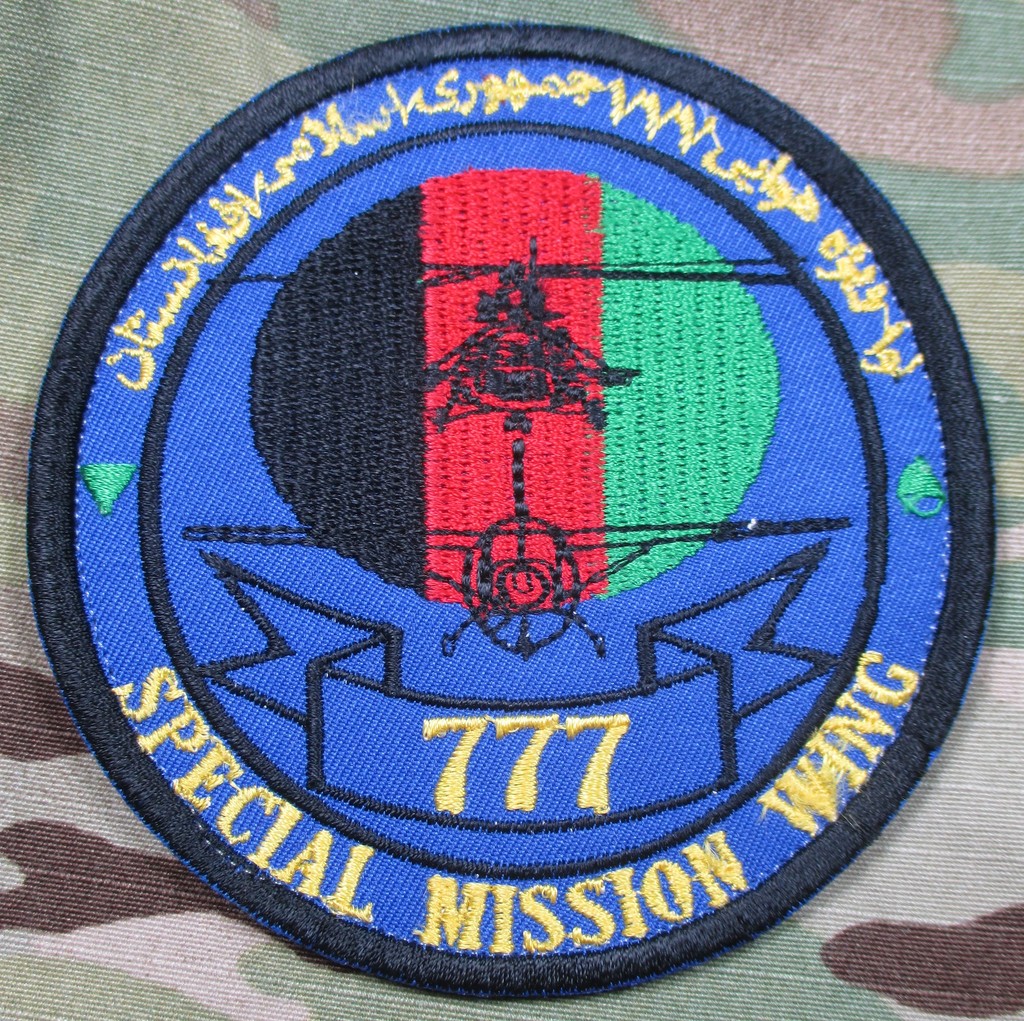 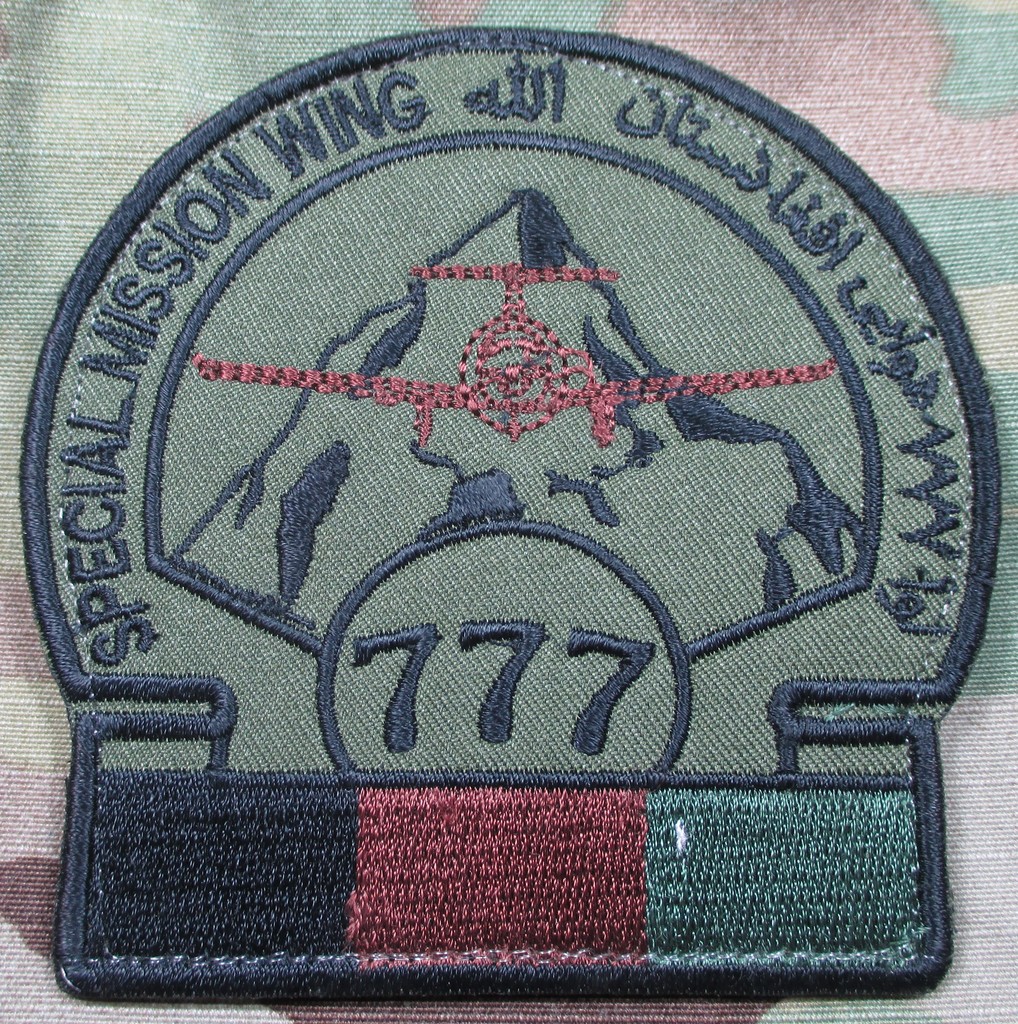 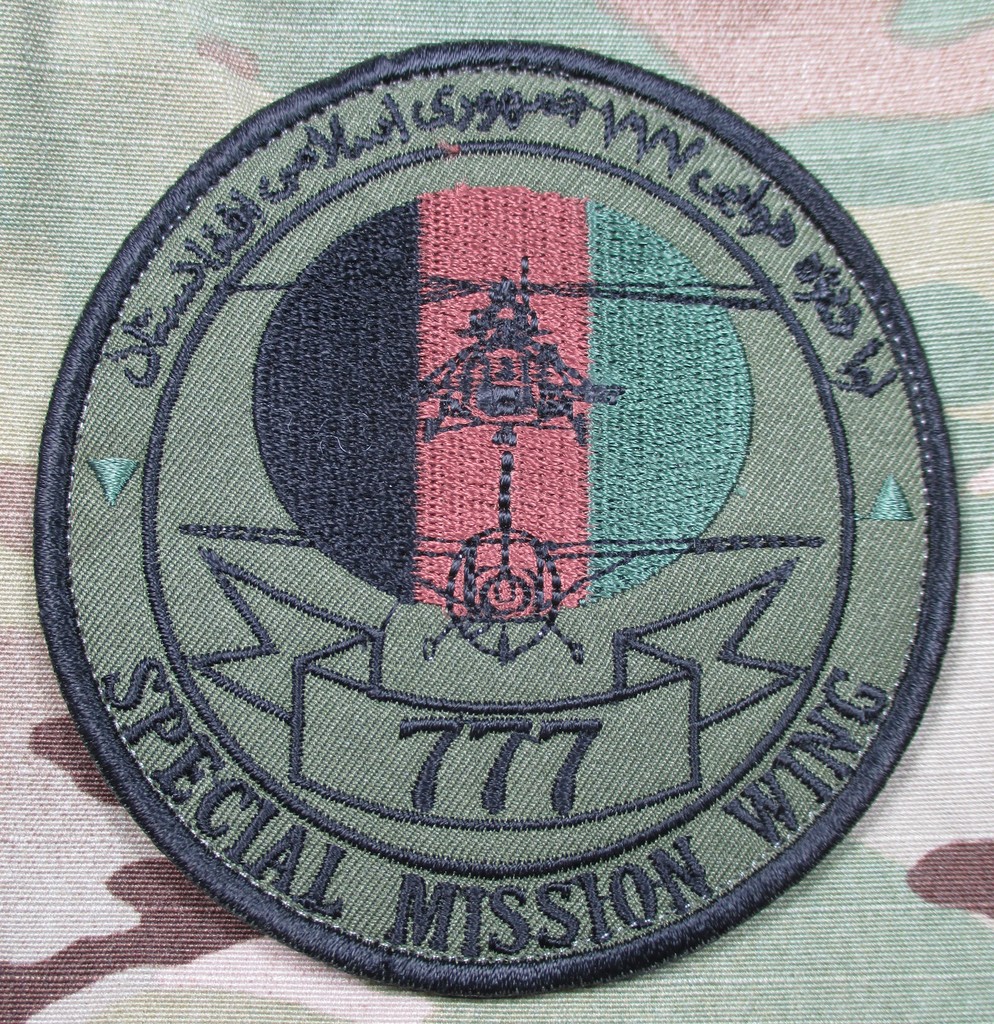 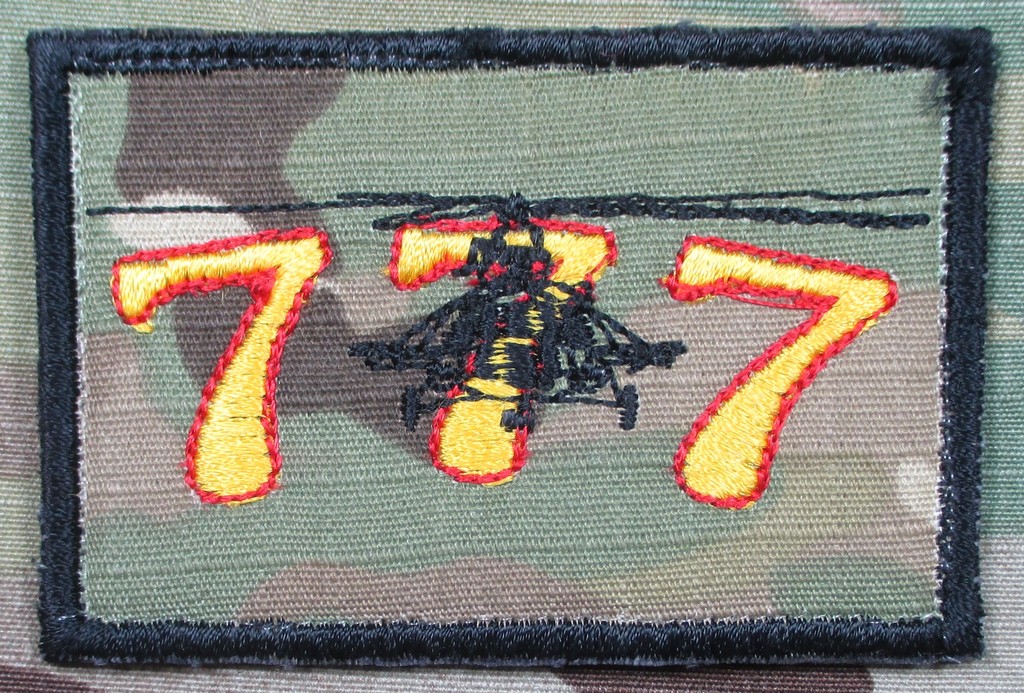 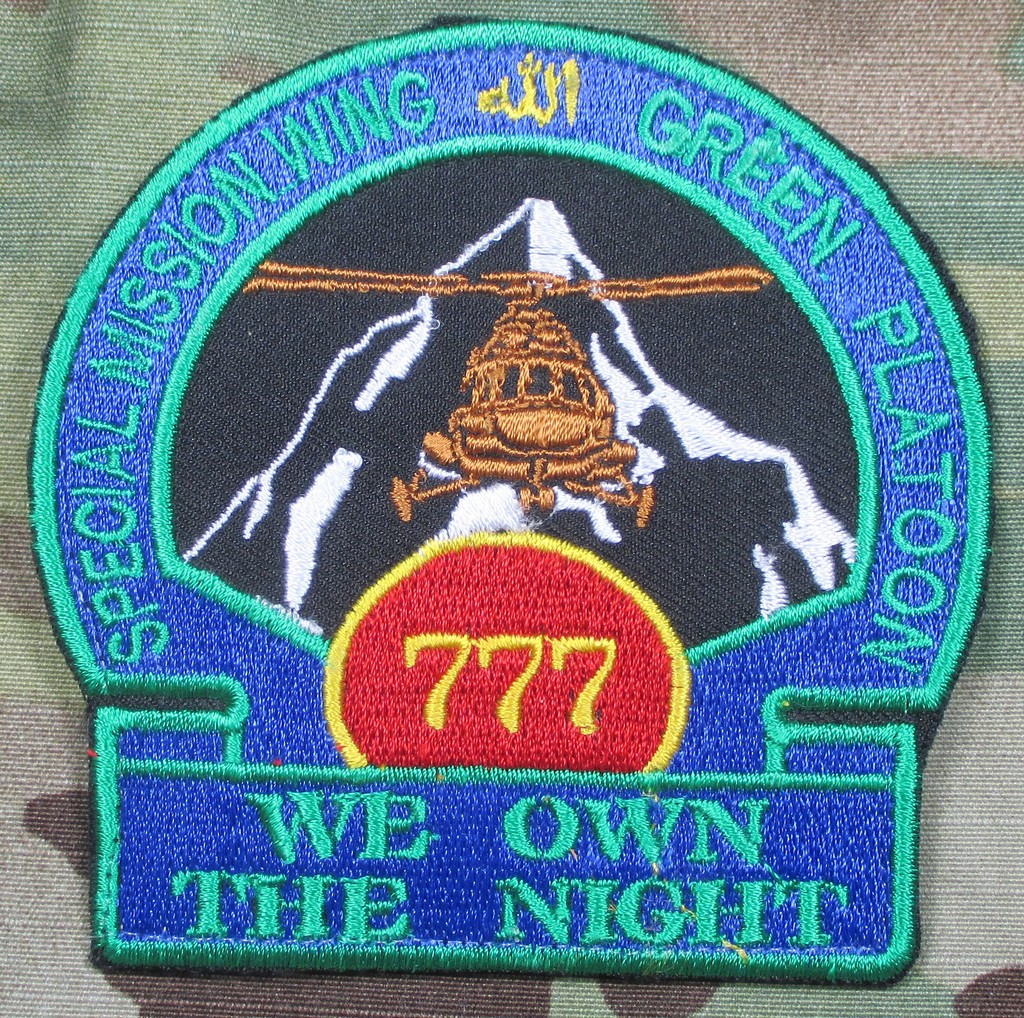 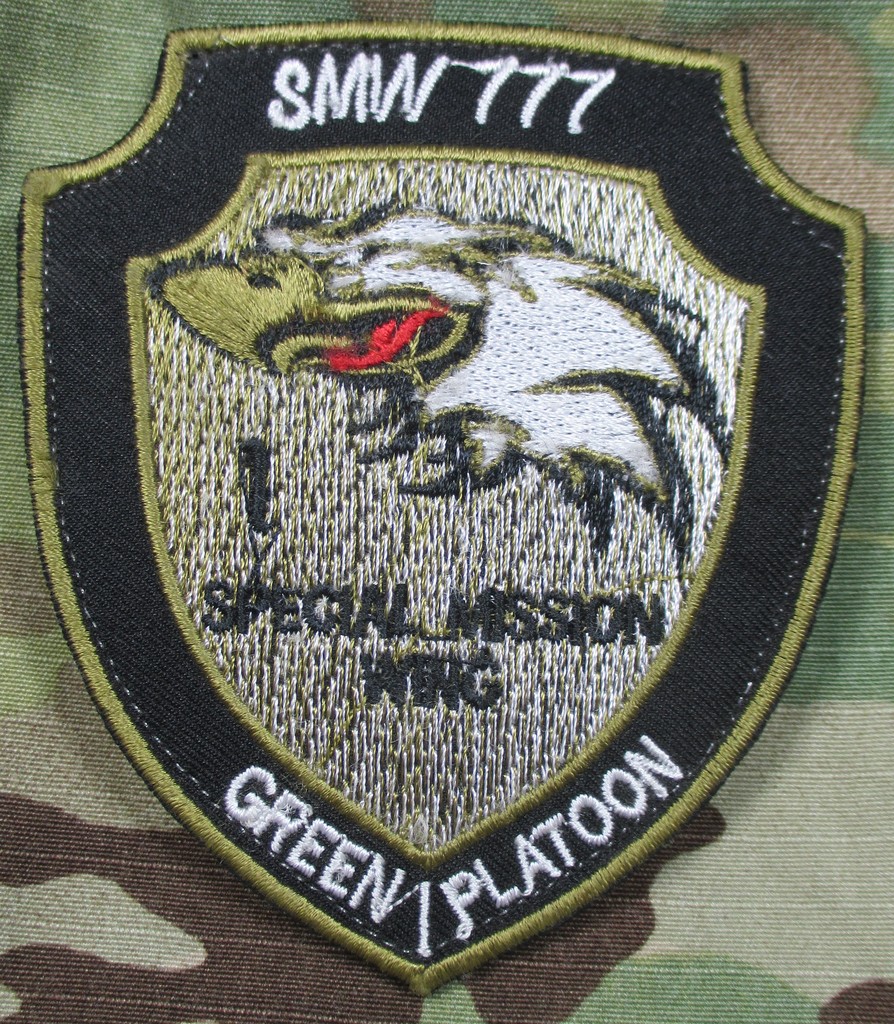 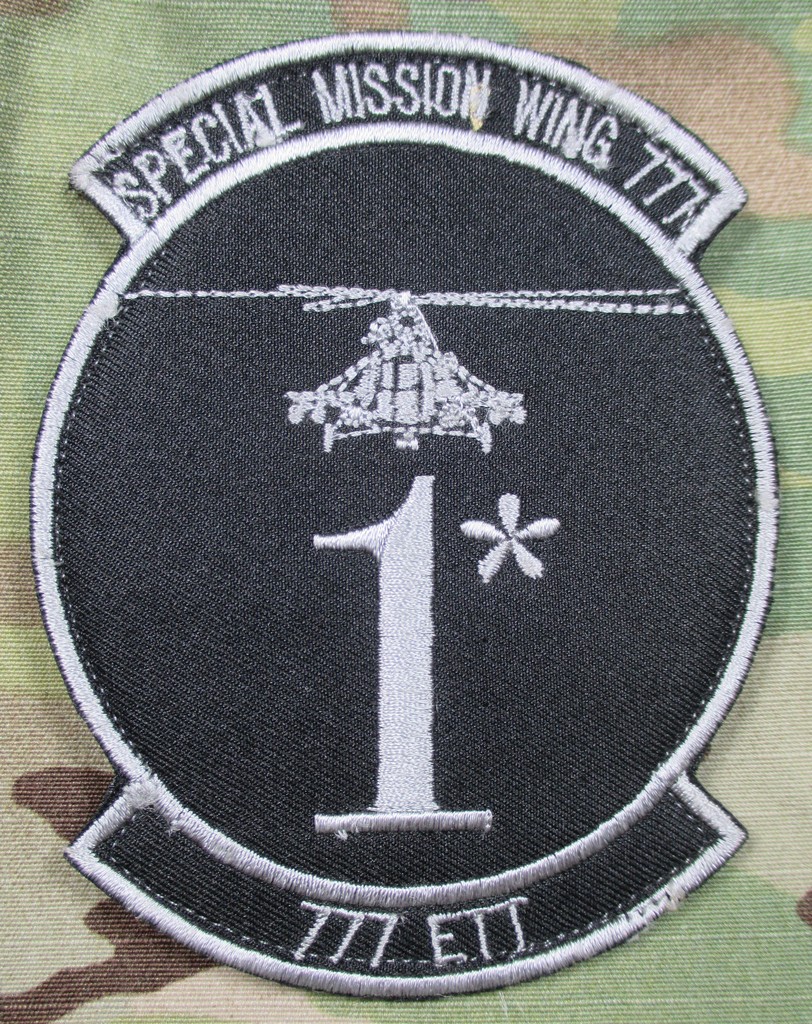 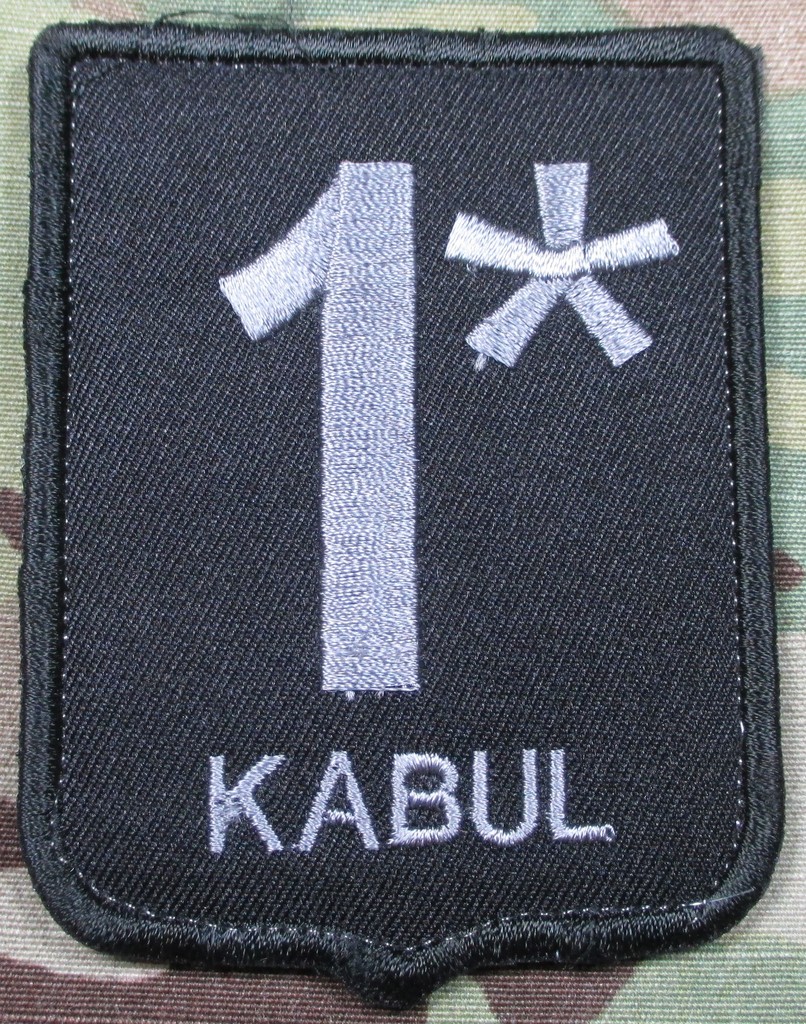 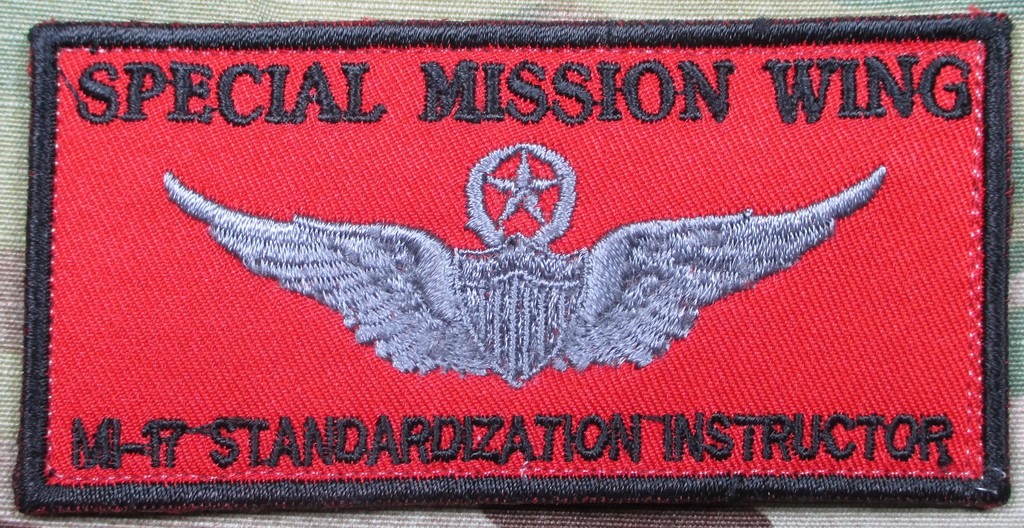 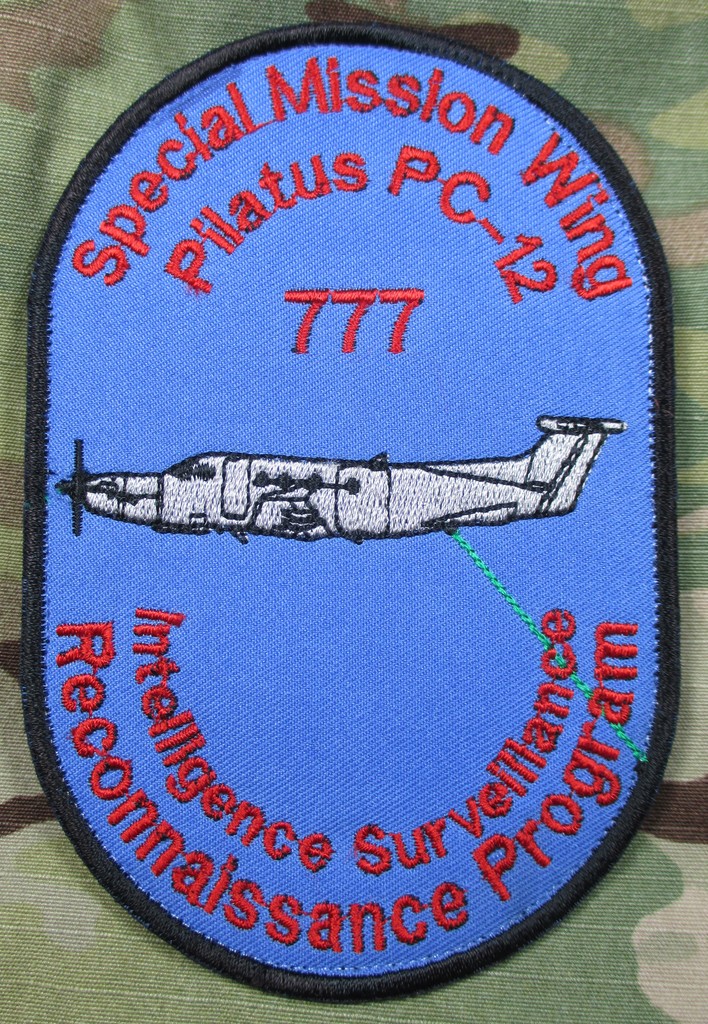 Those are great patches - I guess those are Mi-17s (tail rotor on the left side of fuselage)? Mark
Jim McCauley

Posted these earlier. These are from the first run of patches as I was a unit mentor when the Special Mission Wing "stood up" in 2012. 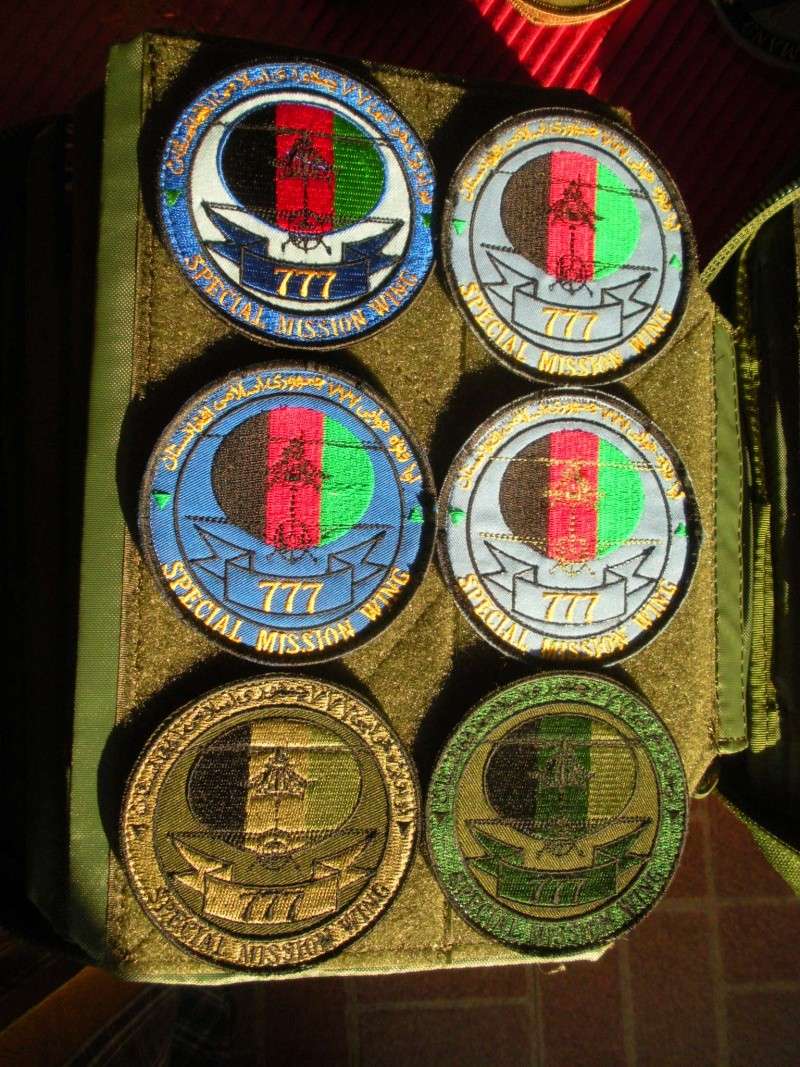 
Two Mi-17 helicopters were taking off, their blades chopping the air. The huge aircraft were moving forward, one behind the other. The engines easily lifted up the heavy, metal aircraft that loomed as large as a Hindu Kush mountain.

The two aircraft, carrying 30 commandos, were performing a mission in Azra village in Logar province, 100 miles south of Kabul. Logar is a very beautiful place. It has high mountains with a blue river running through the bottom of a large valley. Azra, in particular, is very green; however, there are many valleys that are narrow and dark at night.

It was the middle of the night. A small but treacherous group of terrorists were asleep in beds, which only days before they had taken by force from an impoverished farmer and his family. They chose this particular location to rest and prepare for their operations because they assumed they would be out of reach of Afghan National Security Forces (ANSF).

The terrorists were weary from a day of planning the assassination of the district governor. They didn’t detect the distant, faint, rhythmic sounds of helicopters flying through the night sky, a sound that has become commonplace over the years. The helicopter sounds faded away, but that provided no respite for the terrorists. Over the next few hours, Afghan commandos assaulted the house, neutralized the threat, captured the surviving terrorists, gathered or destroyed the terrorists’ weapons and equipment and departed via helicopters – all before the sun came up.

In years past, these kinds of operations were mostly coalition planned, led, and executed by supporting coalition aircraft manned by coalition pilots and aircrew. Today, they are conducted entirely by Afghans. Aerial support to these complex operations comes from the Afghan Special Mission Wing (SMW).

The Special Mission Wing is Afghanistan’s premier aviation unit, providing the region with its only night vision goggles, air assault capable aviation support. It’s also the source of Afghanistan’s only day/night intelligence, surveillance and reconnaissance (ISR). The SMW’s mission is to support the Special Security Forces of the Ministry of the Interior (MoI), Ministry of Defense, and National Directorate of Security in counterterrorism and counternarcotics operations.

The unit is currently manned by over 300 Soldiers and police officers and will soon grow to more than 800. Two squadrons of the SMW are headquartered in Kabul, but a third and fourth squadron will soon begin operations in Kandahar and Mazar-e Sharif, respectively. The SMW has over 30 Mi-17 helicopters and 12 PC-12NG single-engine airplanes, growing to 18.

The core members of the SMW have been flying and maintaining the Mi-17 helicopters in Afghanistan for decades, but the unit’s direct roots date back to 2005 when they were part of the MoI’s National Interdiction Unit. In its current form, the SMW was stood up in July 2012 as a joint military-police effort.

A relatively new component of the SMW is the PC-12NG intelligence, surveillance and reconnaissance airplane. This fixed wing aircraft is rugged and stable. The basic aircraft was built in Switzerland and then highly modified in the United States to perform multiple missions. In addition to its primary ISR role, the PC-12NG can perform airdrop, troop transport and medical evacuation missions. The interior can be configured for any of these missions in a very short period.

This capability represents the first organic fixed wing capability for the Afghan Special Security Forces (ASSF). The SMW is in the process of integrating this new capability into air assault missions. The PC-12NG has the ability to communicate not only with the Special Mission Wing Mi-17 helicopters, but also directly with the supported units on the ground. As the tactics, techniques and procedures are being developed, it is becoming clear how effective and important this support is to the ASSF and other Afghan national intelligence organizations.

The PC-12NG provides long range day and night overhead overwatch capability that has already proven to be extremely effective in supporting the Mi-17 aircrews with weather observation, real time surveillance and situational awareness. The most apparent benefit of the PC-12NG is the ability of the Afghan Mission Sensor Operators to be able to communicate potential threats directly to the Mi-17 aircrews in Dari or Pashto as they approach a target area. The Mi-17 aircrews refer to the PC-12NG as their “big brother in the sky.”

The SMW has the monumental task of building capability while simultaneously supporting the operational requirements of the ASSF. This task, while extremely challenging, is not impossible and certainly worth the effort. The SMW provides essential operational reach to the ASSF, delivering forces to locations that are extremely difficult and often impossible to reach tactically on the ground. Thanks to the dedicated and talented members of the SMW and the highly trained and effective special operations forces they support, the enemies of Afghanistan have nowhere to hide.

This unique and highly capable unit is commanded by Brig. Gen. Fahim Ramin. Gen. Ramin is a tall, charismatic, and extremely capable officer from the MoI, a fluent English speaker, and a true patriot. He often speaks of doing what is right for Afghanistan and has a reputation for his intolerance of corruption.

Ramin has flown Mi-17s for more than 16 years.
He eschews traditional practices of patronage and ethnic favoritism and instead embraces meritocracy. His men are fiercely loyal and consider themselves members of the SMW family. The pilots of the SMW perform their mission safely and effectively under extremely difficult conditions and in some of the most challenging terrain
in the world.

When asked about what he thought the readers of this article should know about the SMW, Gen. Ramin responded: “They should know that we are very grateful for all the support and assistance the coalition has provided to the SMW, enabling us to accomplish our mission for the Afghan people. Tell them thank you.”
Jim McCauley

msmith275 wrote:Those are great patches - I guess those are Mi-17s (tail rotor on the left side of fuselage)? Mark

msmith275 wrote:Those are great patches - I guess those are Mi-17s (tail rotor on the left side of fuselage)? Mark

There's an Mi-8 variant with tail rotor on the port side? I had not known that. I thought the tail rotor starboard was all Mi-8 and port side was Mi-17. But what do I know - I was only human cargo going out the back of them!

Not to sidline into an aircraft identification class, but Jim, you have an awesome background in this, and it does help in identifying patches.

Did you ever see any 6th SOS or 160th mentor/advisors wearing any of these 777 patches?

Thanks in advance for sharing your knowledge!

See post #14 in this thread.  It's a friend of mine wearing the patch. I'll look through other pictures and see if I can find more pictures of guys wearing the 777 patch.

Here are some Special Unit Wing patches in their natural habitat at a patch shop in Kabul... 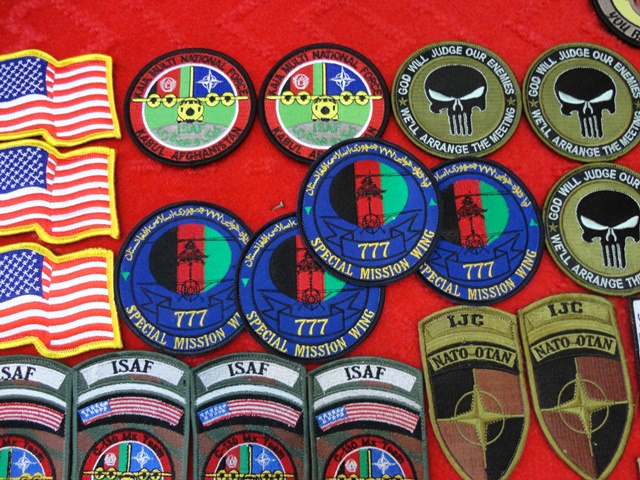 Here is a little "where are the other 777 patches", same patch wall Kabul 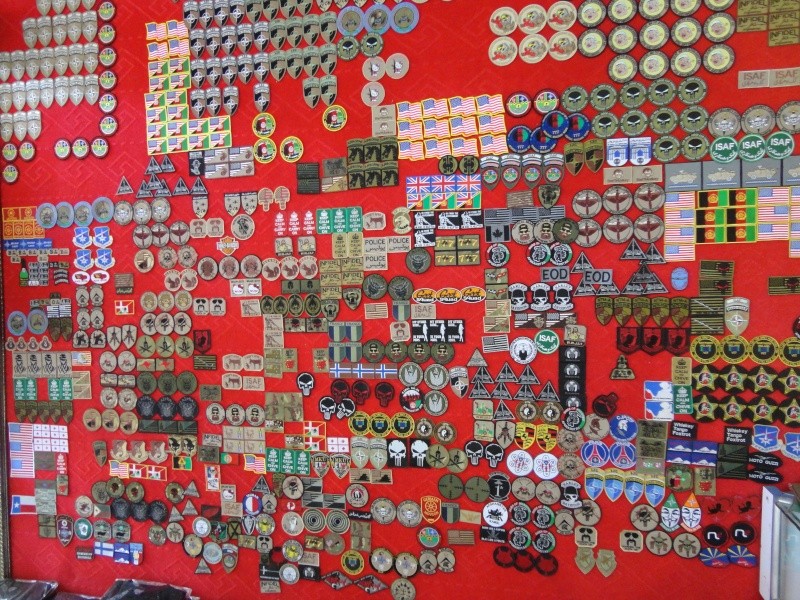 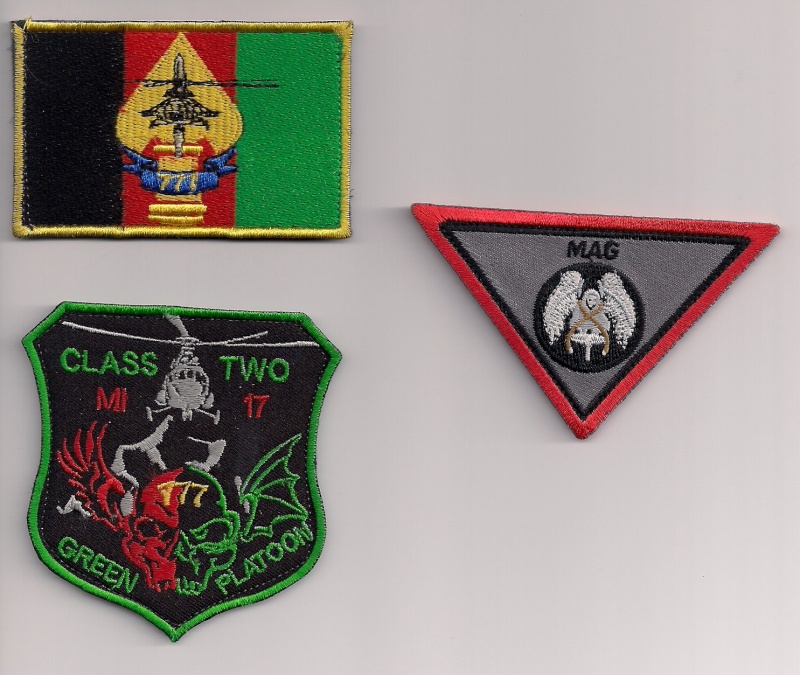