Good Day Guys n Gals
Herewith a collection of patches worn by the Coalition forces contributing PSYOPS personnel to the Combined Joint PSYOPS Task Force, or CJPOTF. Many nations do not have the capacity to provide for a full time PSYOPS function. Many nations are constrained by political uncertainty about PSYOPS and negative perceptions about it. Many thus do not have such a capability formally recognised within their military structure. Many nations 'hide' this capability within more 'acceptable' termed units such as Civil Military Cooperation or Information Operations. The PSYOPS function, however, is fast becoming an important aspect of modern counter insurgency and NATO / ISAF doctrine. Some nations find it easier to contribute personnel to these multinational coalition units hidden in the myriad of HQ or coalition controled units.
DREW 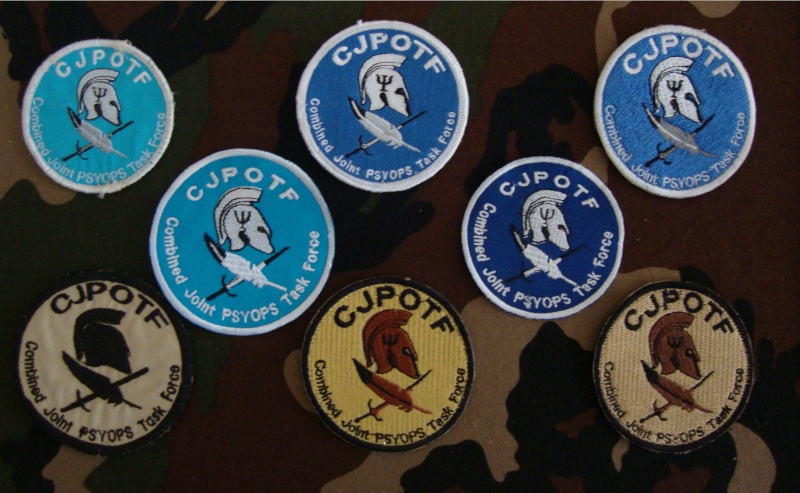 Nice set of patches you have.Respect:

Great patches; thanks for sharing them! From what I can tell there are so many different variations for so many patches it is hard to keep up to speed! nice collection!
drewchaneyaustralia

Thanks for the nice comments Guys. The patches naturally reflect the numerous nations that contribute to the CJPOTF. The variety reflects not only the 'supply' by local tailors, but also the 'demand' by different military forces and their uniform requirements and variation in colour. For reference - I have just received two different multicam versions reflecting this new uniform adoption by multinational forces. Who would have thought the multicam examples could throw up variations? Makes for interesting collecting! I'll post these variations soon for your reference. Take care, DREW
drewchaneyaustralia

Good day all - Merry Christmas. As discussed earlier I have recently received 3 variants of the CJPOTF patch reflecting the new uniform of choice: multicam.
Enjoy.

If you have any other variants - please let me know or list - always keen to learn more.
DREW