On my last deployment I traded some patches with Romanians in quick passing and wasn't able to get much/any information. Would any of you be able to help me get some more info?

Welcome to the forum, Romanian stuff is not my thing, so hopefully someone more knowledgeable will chime in.

The third picture is the Romanian army 2nd Infantry Battalion Calugareni, they were the first into Afghanistan

The fouth picture is the Romanian military police, the gendarmerie, unlike in the US they also have jurisdiction over civilians.

The sixth picture is the Romanian army 9th Mechanized Brigade

The eighth picture is the Romanian air force 90th airlift base

The ninth is a generic Romanian armed forces

Twelve I have seen pictures of it being won in conjunction with a special forces arch but i am not sure exactly what it is. 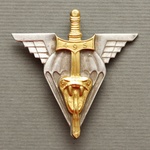