Although this is beyond the OIF time period (since we're now in the OIR campaign) it may be of interest to the patch collectors in this forum.   Below is a snippet from the article but the complete article is in the link above. 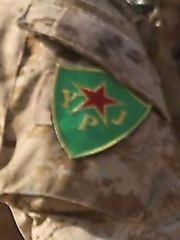 The photographs outraged the Turkish government. Turkey considers the YPG to be a terrorist group linked to the Kurdistan Workers' Party, or PKK, which has fought an insurgency and mounted terrorist attacks inside Turkey for decades.

"We advise [the US troops] to wear badges of [the Islamic State group] or [the Al-Qaeda affiliate] Al-Nusra when they go to other parts of Syria and badges of Boko Haram when they go to Africa," Cavusoglu said derisively. "If they don't see these [groups] as the same as the YPG, then this is double standards, hypocrisy.”

Warren’s condemnation of the patch Friday ran counter to Pentagon statements Thursday, when Defense Department spokesman Peter Cook said it was normal for special operations troops to try to “blend in with the community to enhance their own protection.”

The photographs were the first to show U.S troops in Syria. They were taken in a village about 40 miles north of the Islamic State group’s self-declared capital of Raqqa, which is the target of a newly announced offensive being led by a disparate group of Kurdish and Arab fighters, and backed by American military advisers and air support.

The tension with Turkey, a NATO ally, highlights the shaky alliances the U.S. is trying to forge in Syria, and the ethnic and sectarian tensions that could tear apart this fragile coalition. The U.S. needs Turkey’s help to cut off the Islamic States’ primary supply routes to the outside world, which run north from Syria through Turkey.

At the same time, the U.S. considers the YPG to be one of its strongest allies on the ground in Syria.
Nkomo

Tom,
Good article and I personally have NO ISSUE with people posting items from the current war with ISIS.
RedLegGI

Love how Turkey threw a fit...Guess they should have let our guys through for the invasion

Turkey's leadership has hindered more than they have helped our efforts...

They could be a deciding factor in defeating extremisms, but they are practicing their own type of extremism..

Germany gave them a big black eye this week by declaring the murder of untold people during the Ottoman period a genocide.