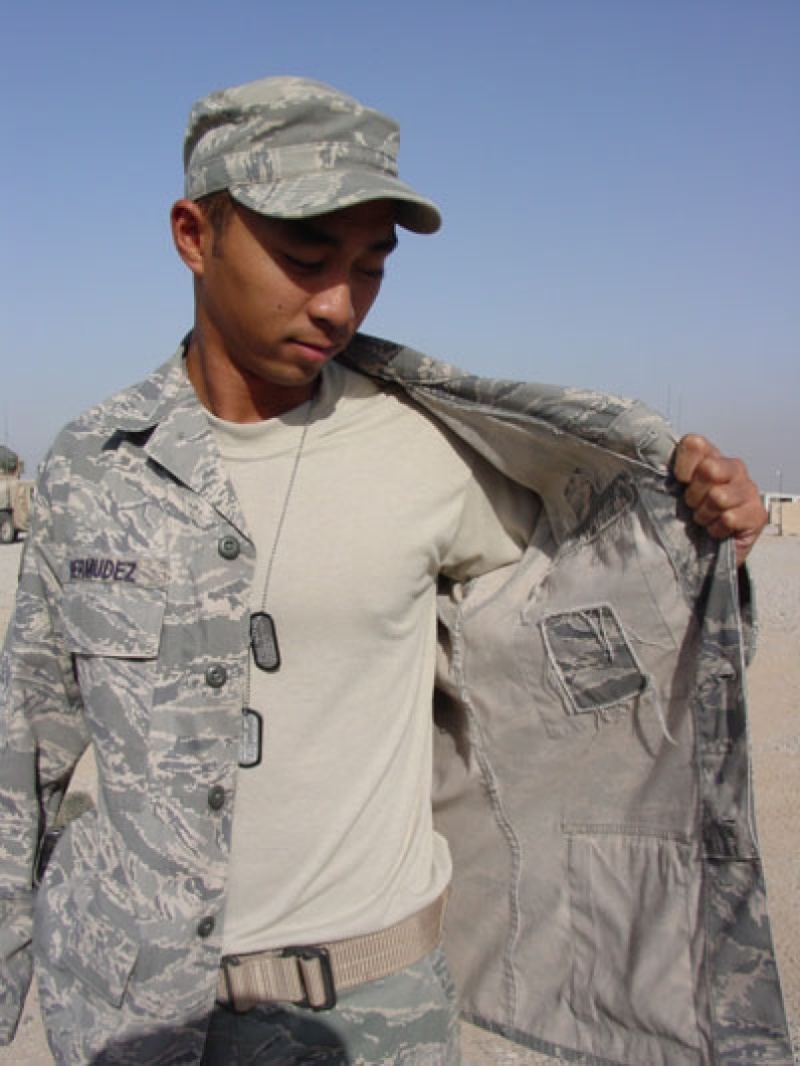 Senior Airman Michael Bermudez, assigned to the 732nd Expeditionary Security Forces Squadron in Iraq, on Sunday shows the inside of his uniform with the map pocket removed.
SCOTT SCHONAUER / S&S
BAGHDAD — Most airmen like the Air Force’s new camouflage uniforms. They say they’re more comfortable and easier to maintain, and they dig the digital tiger print.

Except there is one thing that gets them hot under the collar: The uniforms can be sweltering in warm weather.

The Airman Battle Uniform, or ABU, is more rugged than the old uniforms, partly because the fabric is thicker. But in locations such as Iraq and Kuwait, where temperatures often reach the triple-digits in summer and remain in the low 80s in November, the last thing somebody wants is thicker clothing.

“Whoever designed this obviously designed this for someone sitting in an office, not for out here,” said Airman 1st Class David Bear, 22, who is deployed to Iraq and is attached to the 732nd Expeditionary Security Forces Squadron.

But it’s not just the thickness of the threads. What really have some airmen steaming are the map pockets on the inside of the uniform jacket.

To stay cool in the warmer climates, some airmen have secretly taken out the pockets. Alterations shops on bases in Iraq and in the United States offer to “mod” the uniforms for a few bucks.

While it is typically against regulations to modify the official uniform, the Air Force has cut airmen some slack on the pesky pockets. The service’s Web site acknowledges that some people might find them a tad annoying.

“While not officially recommended or suggested, some personnel may choose to cut the interior pockets out of the garment, as long as it doesn’t change the outer appearance of the uniform,” the Web site reads.

The Air Force has heard the complaints, and Air Force chief master sergeants have been told that a lighter uniform without the pockets is on the way. But in the meantime, airmen wearing the uniforms in Iraq and Kuwait have no recourse other than to remove them.

So, cut away. But be careful. One airman tried to cut out the pockets himself. But when he was finished, his name tag fell off.

Those were the old uniforms, Ben has advised the new ABU's are cut differently to prevent the overheating issue.
_________________
Honorably Discharged US Army Veteran
SGT, Military Police
OEF VI-VII
Mercenary25

So, cut away. "But be careful. One airman tried to cut out the pockets himself. But when he was finished, his name tag fell off."

I can't help it but it sounded as if duffel blog or onion wrote this.
Sponsored content