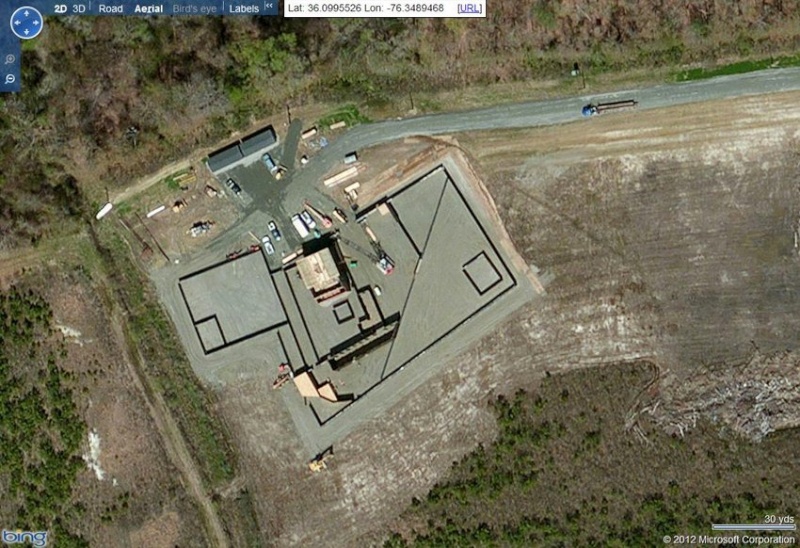 HERTFORD -- After nearly half a century of explosions, folks in Perquimans County have become blasé about the sharp cracks and house-shaking rumbles that roll out of the secretive, government-owned peninsula in Albemarle Sound.

They scarcely bat an eye when a truckload of blackened, bomb-shredded cars rolls out, or a Boeing 727 passenger jet, minus wings and tail, rolls in on the back of a giant trailer.

Last week, though, news broke that a full-size replica of the house and compound where Osama bin Laden had been killed had been built on the peninsula. That was different. Even longtime residents flocked to the Internet, clicking on a website where satellite images had been posted to finally get their first real look at Harvey Point Defense Testing Activity.

Or “The Point” as it’s called by the CIA paramilitary operatives who have trained there since the early 1960s.

That piqued the interest of at least one Internet sleuth, who hunted down images of Harvey Point, found one of the replica under construction, and another a few weeks later of the site showing that it had been torn down. He or she sent them to a website called www.cryptome.org that posts various things governments want to keep secret.

Sidney Eley of Hertford, the Perquimans County seat, was among those who checked out the satellite photos, which by coincidence are marketed by TerraServer.com, a Raleigh company that specializes in aerial and satellite imagery.

“Oh, you hear some explosions, even here,” Eley said. “If it’s kind of overcast, it seems to let the noise travel, and it will kind of rumble like thunder.”

Hertford is about eight miles from the base.

Eley, director of the county chamber of commerce, is among a handful of outsiders who have actually been on the base, for a tightly-controlled visit by a group of local dignitaries about 20 years ago.

“They just invited us to come out for lunch, and re-created some small explosions for us,” he said. “They said that basically they practiced using explosives for things done throughout the world to help various parts of our government.”

No one identified the organization that his hosts worked for, he said.

Not that they really had to: The CIA’s presence there has long been an open secret, said John Pike, a military and intelligence analyst who runs the web site www.globalsecurity.org.

“I can tell you exactly what it is: a seaplane base,” he quipped.

Harvey Point was established in the early 1940s by the Navy, which saw easy access to the calm, broad waters as perfect for seaplanes.

After World War II, like many war-era bases, it was abandoned.

Then in 1958 the Navy re-established a base there for a new jet seaplane program that at one point employed nearly 3,000 military and civilian workers. But the giant P6M Seamaster aircraft proved to be a dud. The Navy shut down the program in 1959, and in the early 1960s apparently turned over control of the base to the CIA.

By the late 1990s, the agency’s importance had faded. It was still using the base, but not heavily. It was bin Laden who revived Harvey Point’s fortunes, Pike said.

The budget for the branch of the CIA overseeing paramilitary activity – then called the Directorate of Operations – grew sharply after the 9/11 terrorist attacks.

“Since then, there has been a complete renaissance in snake-eaters,” Pike said, using an insider term for special operations troops and paramilitary operatives.

The satellite images of the 1,200-acre base, particularly one on virtualglobetrotting.com, show intriguing details of the nearly two-square-mile training base. There are now nearly 100 structures, what looks to be a massive storage lot for old vehicles to be used as targets for explosives practice, and several fields with scattered junk vehicles that clearly have circles of scorched earth around them.

In one photo, a military C-130 transport is parked beside the 5,000-foot runway.

The fuselage of a Boeing 727 passenger jet also is visible, apparently set up for some sort of training, and there is an array of 30 house-size, earth-covered buildings of the kind used for storing explosives.

Pike said he hadn’t seen the images of the rows of storage buildings or other new-looking facilities, but based on descriptions said the base clearly had grown substantially in the past decade.

“They just opened up the coffers for that part of the agency after Sept. 11, and money was just no object,” he said.

And money was certainly of little importance when planning and executing the raid on bin Laden.

Near the west side of the base, the opposite end from the tip of the peninsula, the mock compound stood.

A photo taken Feb. 15, 2011, shows it under construction but nearly complete. Another, Jan. 30 of this year, shows the compound had been completely removed. Bin Laden was killed May 2, 2011.

Several media reports on the photos last week asked why the compound had been destroyed. It seems obvious that secrecy for the mission was crucial. But another reason is likely that such temporary training mockups are usually taken down and the material reused. According to the new book, the mock-up was constructed of shipping containers, plywood and fencing.

On Fort Bragg, for example, it is routine for soldiers to use entire villages built of shipping containers for training just before they deploy overseas.

Then the villages are torn down, and the containers reused for some other training exercise.

The SEALs staged assault after assault via helicopter on the bin Laden compound replica, until it was automatic, according to the account in “No Easy Day.”

The intelligence experts who had been studying the actual compound in Pakistan via drone, satellite and other sources could accurately describe the outside, but had no way to know how the interiors of the buildings were arranged, so the mockup didn’t have an interior.

Still, the fake compound was eventually so detailed that the doors and balconies were in the correct locations.

Bissonnette went out of his way to compliment the civilian staff there, which the SEALs sometimes asked to make adjustments to the mockup. The changes were always done quickly and without questions, he wrote.

Perquimans County Manager Frank Heath said many locals work on the base. It’s one of the larger employers in the mostly-rural county, and is highly valued for those jobs.

He said that he, too, had checked out the images, but didn’t want to say much about the base.

“We don’t really comment on what they do or who they are, except to say that they are an asset to the county, and leave it at that,” he said.
_________________
"I looked up at the bunker in front of me and saw a khaki-uniformed NVA with a pith helmet, chest web gear, green Bata boots and an AK, Type 56, and no other identifying insignia. Then I shot him." -- Sergeant Tony "Fast Eddie" Anderson, RT Kansas, TF1AE, 1971

"Choosing to die resisting rather than live submitting they fled only from dishonor and to meet danger face to face." - Lieutenant General John F. Mulholland Jr, USASOC Fallen Soldiers' Memorial Ceremony, 25 May 2012.