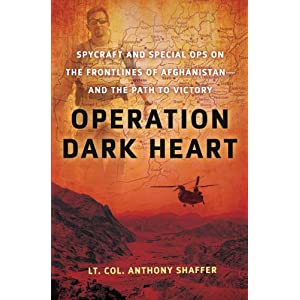 I heard about this book from a government professor at my university... it's just been released, and apparently contains some interesting details about the War on Terror -- so much so that the Department of Defense threatened to buy up the entire first printing run (some 10,000 copies) to prevent it from hitting the shelves.

This book may well become to our generation what the "Pentagon Papers" was to Vietnam.

Booklist wrote:A nonfiction book that frequently reads like an adventure novel, this account of the author’s intelligence operations in post-9/11 Afghanistan should definitely strike a chord with readers. Shaffer was an intelligence operative from an early age, joining army counterintelligence in the early 1980s at the age of 19. By 1991, he was running HUMINT, the army’s clandestine human-intelligence program. Prior to 2001, he was working on an operation called Able Danger, which, according Shaffer, uncovered some of the 9/11 terrorists a full year before the attacks, although—again, according to Shaffer—the government blocked attempts to act upon the information. He saw the same sort of thing happen again in Afghanistan, when red tape and inept policies hindered efforts to fight the Taliban. This is almost two books in one: a rousing chronicle of the author’s experiences on foreign soil and an examination of a bloated bureaucracy that is in desperate need of retooling. Shaffer adopts a mostly objective tone, although there are moments when his personal views sneak through (the phrase “Bush administration lunacy,” for example). Although no coauthor is listed, the book reads like it was transcribed from taped interviews (see the occasional oddly constructed paragraph where it looks like someone stuck in parenthetical explanations of things the author was saying). All in all, a fascinating, eye-opening book.

_________________
Interested in any European digital camo.
See my collection online: http://www.benscamo.webs.com
"Extremism in defence of liberty is no vice."