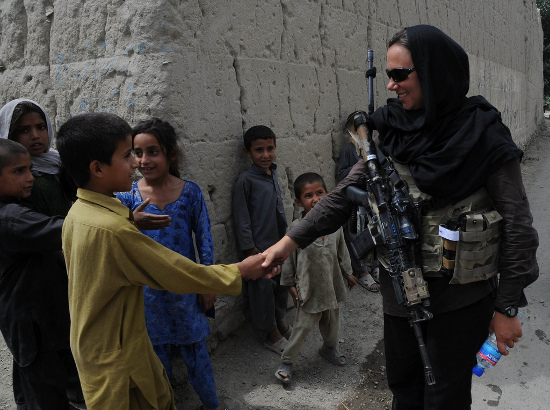 A US Army Cultural Support Team (CST) member from Special Operations Task Force - East shakes the hand of a young Afghan while on a presence patrol. The purpose of the patrol was to gain atmospherics from local villagers, and for the CST to interact with Afghan women, Kunar District, May 24, 2011. US Army photo by Specialist Patricia Caputo/Released.

Christian Lowe reports on the deployment of Cultural Support Teams attached to Special Forces and Ranger units in Afghanistan at Military.com.

Via WomenInTheMilitary.com
First Lieutenant Ashley White died in Afghanistan last weekend along with Sgt. 1st Class Kristoffer B. Domeij, of San Diego, Calif., and Pfc. Christopher A. Horns, of Colorado Springs, Colorado. Like so many of our troops, they were killed by an IED
Ashley was a true warrior. A member of a Cultural Support Team, she worked in support of Special Operations units and exposed herself to danger on a regular basis. She was a member of only the second class of this elite female team and you can bet that in the decades to come she will go down in history as a trailblazer for women warriors everywhere.
Ashley, by her family’s account, loved being in the military. What struck me most about the obituary in the Fayetteville Observer was the pride her family felt in her service. It made me think that perhaps we have reached, or are in reach of that point where service is service and the value of sacrifice is not measured by what chromosomes you possess.

All three service members were killed during combat operations when their assault force triggered an improvised explosive device near Kandahar Province, Afghanistan.

A native of Alliance, Ohio, White was commissioned in the U.S. Army as a Medical Service Corps Officer after receiving a commission from Kent State in 2009. White is survived by her husband Cpt. Jason Stumpf of Raeford, N.C., her parents Robert and Deborah White, twin sister Brittney and brother Josh, all of Alliance, Ohio.
http://www.soc.mil/UNS/Releases/2011/October/111023-01.html

In War In Afghanistan, Missions Just For Women October 31, 2011

Congress still bans women from serving in combat, but the U.S. Army has implemented Cultural Support Teams to foster dialogue between elite U.S. service women and Afghan women. The teams work closely with Rangers and Special Forces units during raids. Kevin Maurer recently wrote about the unit’s purpose and tough selection process for The Washington Post Magazine. He speaks with host Michel Martin.

Cultural Support Teams' concept is something realy important, and this is realy great they created them. That's just too bad they didn't created them directly at the beginning of the wars because it'ld probably have changed many things in both Afghanistan and Iraq. For example, the arab dislike a men (/woman) search a woman (/man) at a check point or for medical health services. It was very badly considered and totaly irrespectuous for them because of the difference of culture. On check points, if a man (/ Woman)'s searching a man (/woman), it isn't so problematic because there's no gender contacts (man <-> woman).

It's like when you wear a glove and reach out to greet another guy, without removing your glove. This is totaly irrespectuous. At the beginning of his presidency, GW Bush did this mistake with another Chief of State and it resulted a diplomatic incident between the USA and the other country

This is not necessary a voluntary mark of irrespect, but with the change of culture the impact is totaly different and you lost control. This is why this is realy important soldiers receive some cultural informations before being deployed in another country. This is also why it's important to have "foreigner" in an army, like for example soldiers who have iraqi / afghan origin but US born or US nationalized because they often know the langage and the culture. So it's beter to great a good inter-cultural relationship.
_________________
"As you know, you go to war with the Army you have. They're not the Army you might want or wish to have at a later time. You can have all the armor in the world on a tank and it can (still) be blown up..." - Donald Rumsfeld (Camp Buehring, KU - Dec. 8, 2004)