A new DPCU variant designed for desert conditions using different colours and was first tested in 1998 at the Woomera Missile Test Site in South Australia.

2001 1st Issue of DPDU. Mk1 was printed in 3 colors (Brown and Grey on a Tan Background) with 1/3 of the normal Auscam print missing, rushed into issue for Australian special forces (Special Air Service Regiment) deployed to Afghanistan as part of International Security Assistance Force (ISAF).

2002 2nd Issue DPDU. Full Auscam print was used with a full 5 colours. The colours were: Brown, Lime Green, Grey, Very Light Blue (almost Grey) on a Tan Background. This was again issued to SASR in Afghanistan after the Mk1 version was found to be too light in colour for the terrain.

2003 3rd Issue DPDU. This is also in the full Auscam print with 5 colours. These colours are: Brown, Grey, Very Light Blue, Purple on a Yellow Background. The cut was changed in the shirt with the bottom pockets being omitted and placed on the sleeves. This the current type issued to all ADF personnel serving overseas in arid/desert regions such as Iraq.

2006 Current issue DPDU. This version appeared around mid 2006. The colours remain the same with the previous DPDU. Changes to the uniform include repositioning of shoulder straps to the chest, the changes of the chest pockets and cargo pockets from the button-fastened flap of the pocket to zips and minor changes to the sleeve pockets. This version will replace the 2003 issue uniform.

The desert camouflage uniforms have been called "clown suits" by US military personnel operating in Operation Iraqi Freedom. However the DPDU is much more effective then the current US Army uniform in an urban environment 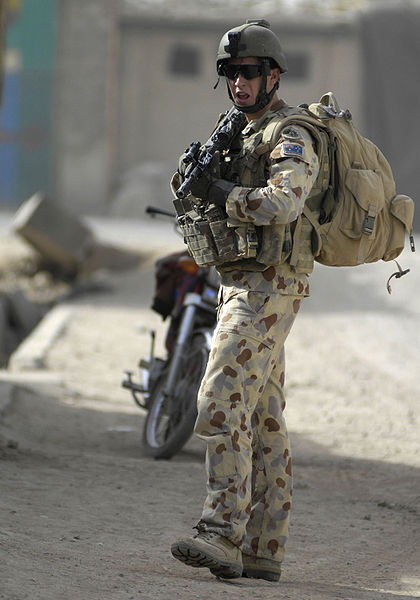